A popular, well-loved, and acclaimed Filipino actress has passed on recently. Being a respected public figure of her stature, good words of condolences, eulogies, and tributes poured in as revealed by television coverages.

As I viewed footages of her wake shown intermittently on TV, the remarks and messages given by her family, friends, and colleagues both as a person and an artist were simply astounding. These testimonies made her touch deeply palpable to all despite her physical absence. Memories of her seared the hearts of many. Though a lifeless corpse in a flower-decked coffin, her spirit was much alive and lingered animatedly among the people whom she spent her life with. She may be dead now, but her presence prevails strongly.

In the gospel today, Jesus appeared in the flesh right in front of His disciples days after He ascended to heaven. It was said that the disciples hid together quietly in a house for fear of the Jews. Jesus appeared to them Himself despite the locked doors and wished them peace. He showed that he was alive before the people who were always with Him in His lifetime.

When a human being passes on, we extoll that person’s values, deliver eulogies on his/her goodness, and keep memories intact. This is because we want the good in that person to remain with us, so we could continue experiencing him among ourselves.

With Jesus, not only do we have memories and teachings passed on through the generations, but He has also given us the Holy Spirit! Let us keep Jesus alive in us and allow Him to stay with us. May we accept the indwelling of His Spirit, the Holy Spirit which He has sent. It is this Spirit that would inspire us to proceed in pursuing His works and His mission. Let us always choose to keep the Lord alive in us! 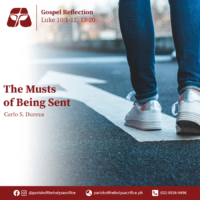 The Musts of Being Sent 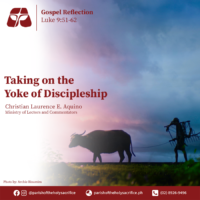 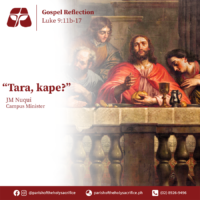