Taking on the Yoke of Discipleship
Christian Laurence E. Aquino
Ministry of Lectors and Commentators

If there is a common theme the readings for this 13th Sunday in Ordinary Time project, these are the images of a yoke and the act of plowing. Marahil ay mas kilala natin ang mga katumbas nitong mga salita sa Tagalog, “pamatok” at “pag-araro.”

Elijah, in the First Reading (1 Kgs 19:16b, 19-21), appointed Elisha as his successor by first calling him while he was plowing with twelve yokes of oxen. St. Paul on the other hand, in the Second Reading, writes to the Galatians to “not submit again to the yoke of slavery.” Jesus, meanwhile, in the discipleship discourse from the Gospel of Luke (Lk 9:51-62), says that “no one who sets a hand to the plow and looks to what was left behind is fit for the kingdom of God.”

Let me drive this short reflection on these images of a yoke and the act of plowing in the context of the message of the gospel which is discipleship.

Sa tradisyunal na pagsasaka, isinusuot ang pamatok sa mga kalabaw upang sila ang humila sa araro. If we look at it closely, it seems that taking on the “pamatok” is like “enslaving” the animal to do the job of plowing which could have been otherwise more difficult if we do it ourselves. Kaya rin siguro ito ang ginamit ni San Pablo na imahe sa kanyang liham sa mga taga-Galacia: “to not submit again to the yoke of slavery,” which is referred to as the slavery of sin.

But as the same St. Paul says, we are called for freedom for Christ set us free. I find it a great irony that Jesus said to his “potential” follower in the gospel that “no one who sets a hand to the plow and looks to what was left behind is fit for the kingdom of God.” For me, to some extent, it was as if “setting a hand to the plow” is equivalent to placing the yoke upon ourselves. Aren’t we enslaving ourselves in the process?

Our faith is really full of ironies. Kapag umiibiig, nasasaktan. Kapag nagmamahal, nagsasakripisyo. Kapag sumusunod sa kalooban ng Diyos, nahihirapan. But just as how Jesus transformed the image of the cross as a symbol of torture and death to an icon of hope and love, we also transform this image of the yoke, a yoke that we freely take upon ourselves, not to be enslaved, but to ultimately express our freedom of choosing the way of Christ, for the sake of love. Ang pagsuot natin ng pamatok ay ang pagtanggap natin sa tawag ng pagiging disipulo ni Kristo.

But let’s not leave the “plowing” behind. Taking on our yoke is one thing but there is a corresponding work to be done. Inihahanda ang lupa bago ito tamnan. Perhaps this is also one good analogy of discipleship—definitely not an easy job and there is urgency to it. Notice how Jesus said “let the dead bury their dead?” Of course, we should not take this literally; he spoke a hyperbole. We know Jews, like Jesus himself, put importance on the proper burial of people. Kapag nahuli tayo sa paghahanda ng lupa, maaaring datnan ng bagyo o ng tagtuyot ang tinamnang lupa at hindi makakapag-ani. 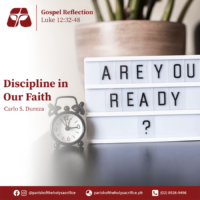 Discipline in Our Faith 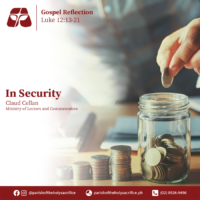 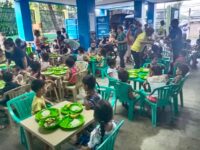